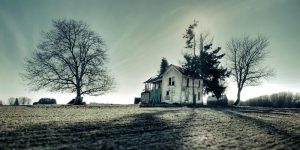 I find myself standing out here once again, peering through the window when I think no one is looking. As I look inside I see the chubby young boy burst into the house with every kind of stain imaginable on his school uniform and the biggest smile on his face. He hurriedly takes off his shoes and tosses them at the first thing he lays his eyes upon as he shouts his mother’s name in excitement. After a few minutes of getting no response he rushes through the short corridor to the far side of the house where he storms into her bedroom and finds her snuggled up under her covers. She sneakily lifts them up to check if he has left the room yet but much to her dismay she finds him staring back at her, putting an end to the charade

“I knew you were awake!” says the boy as he leaps onto her bed.

Everyday it plays out exactly the same way, the boy hops around on the bed until his mother begins to yell at him but unfortunately all he does is smile because even when she’s yelling at him, seeing her after a long day of school is what he looks forward to the most every single day. Eventually she stops yelling after having realised she might as well be talking to a brick wall and so she gets out of bed, and stretches her worn out back that had often served as a landing cushion for her little bed hopper. After that I track their movement to their small kitchen where the mother has to juggle not stepping on the boy seeing as he won’t stop following her around the cramped kitchen space and whipping up an after school snack, which was usually a bowl of ramen noodles, for the excitable young man. As soon as she’s done she prepares another snack and puts it in the microwave. I follow them once more as they head to the living room and the boy tells his mother, who is still very exhausted from her twelve hour night shift, stories about what he did at school that day and who fought with whom and why the teacher had to punish more than half of the class that day. Despite her eyes being half shut from exhaustion, she makes sure to listen to each and every detail of the stories and comment or laugh whenever the occasion calls for it. Hours go by until the mother finally gets a break when his favourite cartoon starts. At that very moment he seems to even forget her existence as he fixes his eyes on the screen and since she’s too tired to go back to her bed she decides to finish off what remains of her slumber on the couch. Only a few minutes pass by before the boy’s older brother arrives from school as well and as soon as he shuts the door behind him the mother wakes up once again. The moment he sees her on the couch, he begins to yell at his younger brother;

“You woke her up again didn’t you?” She just worked five double shifts this week, can’t you just let her rest?”

The young boy stands up to confront his brother and as usual the mother finds herself having to get in between lest a brawl or rather a one sided beating breaks out in her living room. After she gives them a firm scolding both boys calm down and peace is restored if only for a short while because come dinner time a different fight begins and this time over who gets the remote but unfortunately for the young boy it’s a fight he never wins since no one in the house ever wants to watch Ben 10 at prime time when all the best soap operas are on. He storms out of the house in anger and sits outside on the veranda and tries his best not to cry. I walk towards him and sit by his side. I wish I could stretch out my arms to console him but I know that I cannot. But even as he cries I can’t help but feel envious of him. I watch as he cries until his mother comes out and sits beside us. She starts singing one of her wacky made up songs and despite his best efforts to remain angry, the boy breaks into laughter. After a few minutes he forgets he was even angry in the first place and grabs her hand as they get up and head back inside, leaving me behind on my own on the veranda. I watch them as they enter the house and realise that in a different world I could’ve been that young boy. The more I watch them the more I wish so badly that I could have be him. As I watch them sit together as a family in the living room, laughing together despite all the fights and disagreements I can’t help but feel robbed of the life I so badly crave.

The moments pass by as I continue to watch on. The older brother eventually heads to the room he shares with the boy to get some sleep while the boy and his mother continue to watch television until he falls asleep on the couch. She sits by his side and watches him drift away into a deep slumber and joy fills her eyes as she gazes upon his peaceful face. Despite her fatigue and the boy’s weight, she manages to carry him to bed and kiss him goodnight before heading to bed herself. Before she falls asleep she looks out the window directly where I stand and with each day that passes my memory of her face grows ever so vague. As she looks my way part of me wishes she could say something to me, anything at all but deep in my heart I know she cannot because it has been ten years now since she was taken from me. Thanks to her old photographs her image never completely disappears from my mind but the sound of her voice on the other hand is all but gone.

All that I have of her is this empty house with no windows nor doors, the last remnant of the dream she had to make a new home for herself as well as me and my brother. The thought of what kind of man I would be had I grown up in that house often crosses my mind. The thought of what it would’ve been like to be that young boy that I watch every time I walk by the old house. No matter how badly I want to be him, I understand that life doesn’t work like that so now I sit here and watch as these ghosts haunt what would have been my childhood home, ghosts from a reality that never existed, ghosts of a family that lives only in my dreams and a ghost of a version of myself that I so often wish I could have known.

My phone rings and I pull it out of my pocket. As I look at the time I realise I have been here for over four hours now. I also realise that I’ve missed a few texts from my brother. We sometimes talk about the house and he has big dreams for it. He says he wants to clean up the yard and once he has enough money he plans to put in some windows and doors and perhaps put on some paint to complete our mother’s dream home. I always just nod my head and remain silent as he talks about it because in the depths of my heart I know I could never live in that house and I often feel like a bad son for it. But how can I when all I see as I look inside is a ghost? How could I live in a place that houses my greatest dreams and serves as a reminder that they’ll never be? I have never been the bravest of souls, that much is true. So how could I ever hope to enter a haunted house?

Tags: By Katiso Thatho, Lesotho, The Haunted House
No Comments
Share this entry: