The Maiden of Spear and Shield (Finale)

The Maiden of Spear and Shield (Finale) 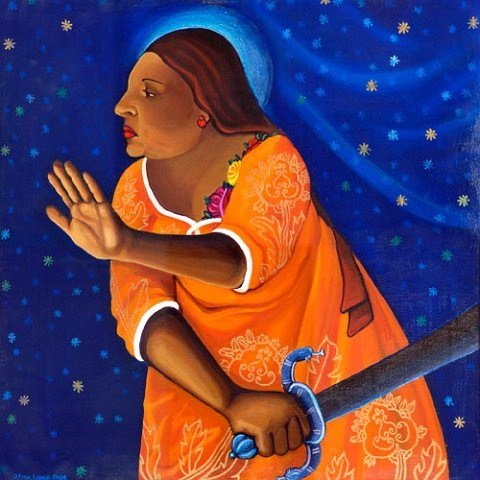 Nambi was underwhelmed. For all Bunya’s wizardry of technology, invention and Zaabu, his map device was a piece of junk. Nambi grabbed the map from Naki. She noticed something in the small hologram. It was sending thin and almost invisible rays of lights towards all the Zaabu near them.

Something in her mind started to connect the dots. She pointed the device at Lumbe making sure that no one caught a glimpse of them. Nambi watched in shock as the Zaabu bracelets of Lumbe and his guards started to faintly glow. She looked at the screen of the map device to see that it was recording the actions of Lumbe and his men. Even the white man Henry Stanley was recorded.

Nambi placed the device in the shrubs as the men continued discussing the plant. After a short while, the two men started walking away from the cart. They were deep in converstion about their plans for the future of Kitara. Nambi and Naki lowered themselves closer to the ground. Nambi said a silent prayer to Katonda that they were not noticed. The men walked past Nambi and Naki in the shrub heading down the path. None of Lumbe’s guards followed them. They were concentrating on the cart.

Nambi picked out the device and hid it in her kaftan. She exchanged a knowing look with Naki. They had to prevent the strange carts contents from leaving the spot they were. Nambi removed the two javelins and prepared to attack the men. She placed them down on the ground and tied the bark cloth on her head round her mouth. She did not want anyone to know that it was her that had foiled her brother’s plan.

Nambi jumped out of the shrub after picking the javelins and combining them into one long spear. She caught the closest guard by surprise. She knocked him square in the face with the heel of her fist. She felt his nose break with the force of her hand. She heard the whisper of a knife coming from her right and moved just in time. The sting of sharp Zaabu steel against her skin struck her by surprise.

Nambi was glad when she heard Naki fighting besides her. The two women fought off the guards who were yelling in alarm. Nambi knew they had to destroy the cart before Lumbe and the white man returned to the opening. She plunged the spear into one of the men’s chests and swung her foot out striking another man. Naki too was not wasting time dispatching the warriors ruthlessly.

It had been a long time since she had fought like a warrior. Her body screamed at her. With every jump, lunge and block, Nambi felt the strain on her muscles and limbs. She did not stop until she was sure that all the guards lay dead at their feet. She was panting like a horse that had been running over a great distance. Nambi approached the cart. She pulled back the sheep skins over the cart and was struck by the strange smell of the herb in the cart. Nambi felt lightheaded for an instant. She took a step back from the cart. Naki too had been affected by the strange herb. The two women could hear the footsteps running up the path too.

“They will soon be here,” Naki said trying to clear her head.

Nambi knew that Zaabu metal was highly flammable if rubbed the right way. She looked at her wrist where she had placed her anklet. She had no choice. She pulled it off and rubbed the edges until she felt the heat start to radiate through the thin metal. She kept rubbing until it sparked into a brilliant flame. She took a deep breath and tossed the burning anklet into the sheep skin.

In a few moments the cart was on fire – all its contents ablaze. Nambi was shocked as the strong pungent smell started to fill the air in the opening. Her head was getting lighter and lighter as the blaze grew. She could also hear the guards. She tried to walk, but Nambi’s body was not listening to her mind. She felt Naki grab her by the shoulders and force her down into the shrub.

They were lucky because Lumbe and Henry Stanley both sprinted into the opening. They were followed by three burly guards. The two men watched in horror as the cart started to crumble into pieces. The strong smell of the herb was in the air and it made Nambi feel mad. She had never had such a feeling before in her life. Her eye sight was hazy and nothing seemed as it should be.

The two men stepped away from the opening. Nambi heard Lumbe’s growl of anger as he sent the guards down the path to look for the culprits. Henry Stanley left Lumbe alone – going back down the path with a promise to bring more of the herb in a week or two. Once Henry Stanley was gone and Lumbe was alone, Nambi’s head started to clear from the effects of the herb’s fumes.

Naki was beside her. Unlike Nambi, Naki seemed to be more immune to the effects of the herbs. Naki placed her hand on her lips. Nambi did not move choosing to use her ears more than anything else. She could tell the fire she had started had begun to wane. It meant that her brother was waiting for news from his guards. When the heavy steps of running passed them, Nambi sat up and watched as Lumbe received the news from the guards.

“I must find whoever did this,” Lumbe shouted as he got off the ground. “Watch everyone in the village. Make sure henry Stanley gets back across the border without any harm to his person.”

Lumbe dismissed the man. He watched the dying embers of the fire with a deep tense fury in his body. After what seemed a long time, Lumbe started to walk towards the path when he stopped and approached the ruins of the cart. He covered his mouth and nose as he got closer. He used his photo and sorted the burnt cart. He squatted and picked up Nambi’s anklet. He looked at it before realising something. He stormed past them down the path.

Nambi knew that her brother might recognise the anklet. She knew Lumbe could have someone in the science guild look for who the anklet belonged to. Nambi loved Zaabu, but she hated its properties because in that moment she knew that she was on the path to great loss. In one way or another the destiny of Kitara had placed her on a path of conflict with people she loved.

“We best get back,” Naki croaked.

Nambi pulled out the device which had survived their scuffle with the guards. She was shocked to see it was in one piece. She looked at it and noticed that Lumbe was moving quickly away from the waterfalls. It was safe for them to get back to Nabirye.

The two women made their way back to the tunnel entrance quietly. They plunged into the darkness without saying a word to each other. Nambi’s body was aching and she had a stinging cut on her arm. She also had a slightly sprained wrist and her leg was throbbing where one of the guards had kicked her with his heavy boot.

Soon they were at the point that went up to Nabirye’s hut.

“Now how do we get up there?” Nambi asked.

“You rushed down the tunnel.” Naki felt along the walls until she pulled at something. Suddenly, there was a groan along the wall. Steps appeared going all the way up to the old woman’s hut. “Let’s go. I am sure the guards are worried.”

They found Nabirye patiently reading something as she lay on her little mat. The old woman looked at them in amusement. Nambi stumbled forward. Her leg was giving her a big headache. Nambi leant on Naki who also had a few of her own aches. Nabirye’s amusement turned into horror and shock when she saw their condition.

“What the hell happened to the two of you?” she demanded.

“We have to get to Ganda before Lumbe does Nabirye.” Nambi collapsed on the mat beside the old woman. The cut on her arm stung. She pulled off the bark cloth from her face and tied it on her arm.

“There is a dangerous game afoot.” Naki made her way to the door and signalled the guards.

“Then I am coming with you.” Nabirye was on her feet. The old fire was in her eyes as she looked at the two girls.