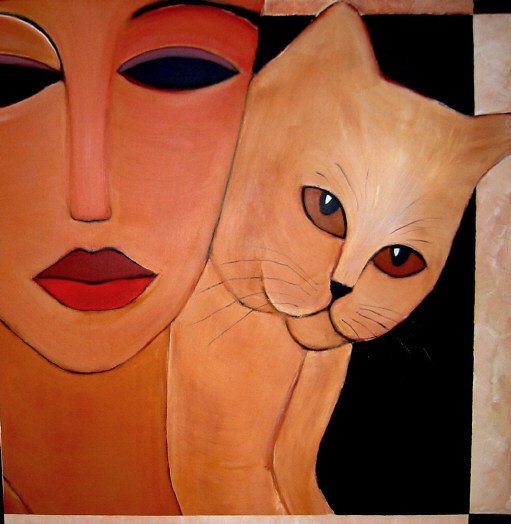 That is what her mother always called her. Being from a family of Basia,who venerate the cat, it was almost fated that she would develop a liking towards the animal. From the moment she could talk, young Senate had always wanted to have a cat of her own and was rather vocal with her requests. Of course, back then she was still just a young kitten herself and her parents had their reservations about whether or not she was ready to take on the responsibility of owning a pet. It was on her fifth birthday that her wish finally came true. Her grandfather’s cat had just given birth and she was presented a wide selection from which she would have to pick a kitten to call her own. It was not an easy choice at all, she looked up at her mother with her young saintly eyes and asked if she could take them all; a question that was immediately met by scorn and stern disapproval. As she looked around, she noticed that some were very energetic, skipping and hoping all around their exhausted mother chasing after nothing. Some seemed rather lazy and chose only to lie down as their mother had done. As her parents grew ever so impatient, she noticed a pair of big green eyes staring right at her. It was perhaps at that moment that she made her choice or rather, the choice was made for her. He wasn’t the most beautiful of kittens nor was he the most lively or playful but there was something about him that young Senate had absolutely fallen in love with. All throughout their journey home, she held on to the kitten like it were the most precious gem in the world. Her father had wanted to put it in a box but she would not have any of it. After screaming her lungs out in protest for a good half an hour he finally yielded and allowed her to carry it in the backseat. She started talking to it, telling it all about her family, where she went to school and all of the things they would do together once they got home. Never had her parents seen her as jubilant as she was at that very moment. As soon as they got home she hurried to the cupboards to get a bowl and some milk for the cat, of course she couldn’t reach them so she ultimately had to ask her parents for help. It had only been a few hours since acquiring the kitten and they were already regretting it, after all it was already drinking the milk they had planned to use at dinner. Her mother then asked her,

“What are you going to name him?”

She looked back at her husband, not quite sure how to react to the name and when she got no help from him she simply looked at her daughter and smiled. Over the months that followed, she and the cat became inseparable. At first the cat seemed uneasy in the new surroundings, running into any dark space it could find at the mere sight of anyone who approached it. It was a bit more relaxed around Senate. She was the only one who had had the honour of running her dainty little hands through its lustrous grey fur. The relationship seemed to only add to the parents’ stress. Once she had started playing with the cat, they would often have to give her quite the earful just to get her to come do her homework or even eat. Her favourite thing to do was crawling on all fours like the kitten. In her mind she believed it made it impossible for anyone to tell them apart. She always found it rather frustrating when her mother easily saw through her clever disguise. Perhaps moms have super sight, she thought. As the kitten grew, so too did their friendship. Even when she got older, Senate always made time for Kitty, perhaps too much at times. Whenever a piece of meat went missing from the pot, her mother knew that the cat was out somewhere probably gnawing at the bone. Regardless of how much she got yelled at, Senate would always steal a piece of meat for Kitty every now and then. When that ultimately seemed no longer viable, she simply refrained from eating any meat she was served and would later give it to Kitty. Her parents had often told her that meat was a staple for the Basia clan, an argument she always used against them whenever they tried to tell her to stop giving all her meat to the cat. Perhaps they had not intended for her to take it so literally. She also believed she could talk to the cat; after all it was her totem animal. Anyone who had ever seen them together would not have much reason to argue otherwise. Kitty would follow her everywhere she went, whether it was out to play with her friends or to the shops to pick up a loaf of bread. Overtime Kitty had grown to be not just a pet, but a loyal companion.

The only thing that surpasses time’s ability to give is its ability to take away. Over the years, kitty grew old and increasingly less agile than before. He would often be overpowered by the younger and more agile village cats, something that broke Senate’s heart beyond imagining. Even though the cat was more of a nuisance to them, her parents did their best to protect it when she was not around. Even after all the time that had passed, they had never seen anything make her happier than seeing that cat for the first time, not being top of her class, getting new clothes or even receiving her very first cell phone. All of those things paled in comparison to that moment when she was just a five year old girl. The saddest moment in her life would come many years later when she would have to say goodbye. After her mother received a transfer to work in Asia, the two compatriots would have to part ways. Part of her wished more than anything to take him with her but alas she had to leave him behind. Not many people were as fond of Kitty as Senate was but seeing him wonder aimlessly without her was a sad sight to behold. Her cousins would always call out to Kitty to feed him whenever they saw him like she had instructed. Although they despised the cat, they took good care of him all the same; being one of them I would know.

One day, from halfway around the world, Senate opened her eyes and found herself in her old bedroom from back home. She found this rather strange, but what was even more so was seeing Kitty looking up at her as a small little kitten like he was when they first met. At that point in her life she didn’t remember much from those days but that particular day she certainly couldn’t forget.

“Hey, where have you been all this time? I miss you.” said Kitty.

Senate had always dreamed of the day she would hear his voice, she couldn’t help but be overcome with glee when she finally did.

“Wait, you can talk? When did that happen?” she enquired.

“I’ve always been able to talk, and you’ve been the only who ever heard me. Don’t you remember?”

“I’m sorry, I’ve just been here for so long and I really miss you. It’s really great here. I’m glad we didn’t bring you along though, some of the people around here would consider you a delicacy.”

“Sounds like a nightmare, I’m glad I stayed. We don’t have much time, come play with me.”

The bedroom door suddenly swung open and instead of leading her to the corridor to her parents’ room, it led her straight outside. She looked around and there was no one there, just her and her Kitty. It reminded her of the old days, often times she would forget everything and everyone around her when they played together. This time however, there really wasn’t a single person there.

“Come, let’s play.” said Kitty as he hopped around her little feet.

They seemed smaller, like those of a toddler. She soon realised that she too had become younger just like Kitty. Suddenly her playful nature came bursting forth and she got all fours and hopped along with Kitty like they did in the old days. Her hands and knees were covered in dirt but that didn’t worry her one bit. All the troubles of her new life disappeared in those few minutes of bliss. This time it didn’t feel like she was pretending to be a cat anymore, after all she could finally hear his voice. The sound of their laughter echoed through every corner of the empty village and despite there being no other person in it, never had it been so full of life. As they played on, Kitty began to repeatedly call her name.

At first she found it rather odd but the more she listened, the more she realised that it was in fact her mother trying to wake her up. Once she had gotten her wits about her, she noticed a solemn expression on her mother’s face that she had never seen before. She wanted to ask what was wrong but after the dream she had, she feared it would only strip her of her happiness. Her mother sat on the bed and then started to pat it with her left hand, signalling for Senate to come sit by her side. For five minutes neither one of them said a word. She could tell that her mother wanted to tell her something and her reluctance to spit it out only made her all the more anxious. Finally her mother took a deep breath, pulled out her phone and began to scroll.

“I just received a text from your brothers back home, they say Kitty has died.”

Silence prevailed once more. Senate’s mother looked unblinkingly at her daughter, waiting for the moment she would begin to shed tears so she could embrace her. She waited but not a single tear came, all she did was look down to the ground. After some time she looked up and had a smile on her face.

“Aren’t you sad that he’s gone? I was so scared to tell you because I thought you’d be in pain.” said her mother feeling rather confused.

“Don’t worry mom, I’m okay and so is Kitty. We were playing together just before you woke me. Now I understand why he came to me. No matter where he has gone I know we will see each other again someday, hoba ke Mosia Motobatsi.”

Her mother suddenly began to relax, she was surprised by Senate’s response but more than that she was proud. The two then started reminiscing on life back home and shared a few laughs together, truly Kitty the kitten had lived a full life.