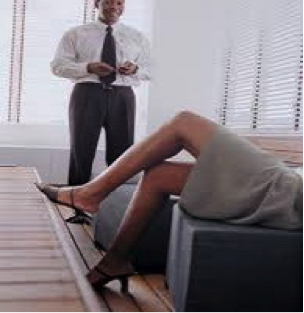 Adam could feel the sweat dampening his shirt collar.

He ripped his hand out of hers and let go of her hand. “You are my boss.” His breathing was heavy. She had trapped him. Her eyes flattered open. She was pushing him to the limits of his control. “I would prefer it to remain that way.”

“Nothing has to change,” Pauline said. “I will remain your boss during office hours.” She smiled at him.

Adam looked away. There was no escape. The door to her office was at the other side of the room. Between them and the door was a small coffee table and a sofa set for visitors. To make matters worse she was in front of him with her hands to his side trapping him in her personal space. Her intoxicating apple and berry perfume wafted into his nose. Adam shook his head trying to think of a way of getting out of there. He had no way of escaping her clutches.

Fuck I am screwed. “Please, Mrs Kiwanuka, I do not want you in that kind of way.”

“Then how do you want me?” she asked.

“Come on.” She pushed herself onto him. “This is not the nineteenth century…and I told you to call me Pauline.”

“Pauline to me it still is.” He saw the anger flash in her eyes. Adam knew he was walking on a tight rope. “I respect you and Mr Kiwanuka. Plus I also have my own girlfriend who I love very much.”

“What does my husband or that girl have to do with us?” Pauline snapped back.

Good, she is starting to get angry. Adam knew that he had to distract her if he was to avoid the temptress’ advances. “I believe in loyalty and not cheating madam. My mother raised me that way.”

“This is Africa. A man can have any woman he wants and I know you want me.”

Pauline laughed sarcastically. She was not moving. She placed her hands on his hips and squeezed a bit. “I am sure that your little girl cannot give you all the things that I can give you.” She leaned forward and whispered into his ear. “I doubt little Alicia knows the things I know. I doubt she can make you as happy as I am Adam.”

“You are married,” Adam gasped.

“So what?” Pauline breathed into his ear.

Adam could feel the tingling sensation crawling along his spine. “Have you thought of pregnancies, STDS and all that stuff?”

“In this day and age of ARVs and condoms, Adam what are you scared of?” She leaned back and looked deep into his eyes. She pouted her luscious lips.

“No no,” Adam said quickly. “You are a very attractive woman, but this,” Adam gently pushed her away creating some space, “is not happening. Please Mrs Kiwanuka, we will both regret this.” He walked round her until he knew the door was to his back.

“Then why do you refuse me?”

“I do not believe in these kind of things madam.”

“We are outside working hours Adam,” Pauline snarled.

“You said that we were supposed to work on a report,” Adam pointed out.

“I lied okay,” Pauline said exasperated. “I wanted to be with you this evening Adam. I was tired of playing games.”

He did not know what to say. Adam had been sure of his boss’ desire to sleep with him. “I need to go home if there is no report to work on.” He started to move towards the door.

Just as he was about to reach for the door knob he heard the quick steps of his boss. He started to turn round just as Pauline grabbed his shirt and pulled him back. “I told you, you will leave when I say you can leave.”

Her strength surprised Adam and they toppled over onto the floor with a heavy grant and a crash. Adam was too shocked to move realising that he had landed on top of Pauline. He could feel her sharp breasts pressed into his chest and her arms were tangled in his. He was looking into her eyes and could feel the deep desire stir in his loins. Adam knew that Pauline felt his erection in his pants. She tried to push her head towards his but he turned his face away.

“I know you want to,” Pauline whispered.

From the corner of his eye he saw that Pauline was flustered. He had not bothered to move for a few seconds and had disarmed her. He turned his face and looked at her. His brain was not really working. He knew he was in trouble as he involuntarily started to lower his head to her. At the back of his head, Adam knew he had the chance to escape or he was going to regret it. Just as he was about to kiss Pauline, Adam saw a vision of his mother flashing in his mind.

Adam took a deep breath, careful to blow some air on Pauline’s face. He saw that she was no longer really aware. He forced his body to move. He pushed off the floor disentangling himself from Pauline. He did not spare a glance at her as he got to his feet. He wasted no time and made for the door.