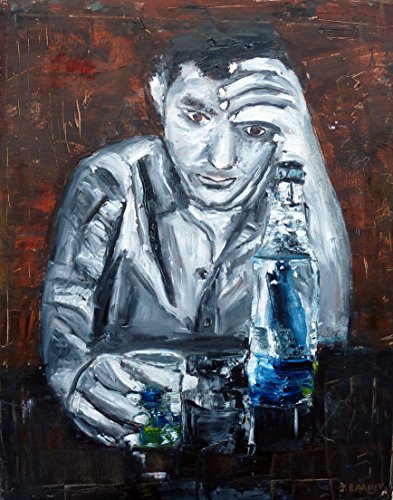 Isaac realised that he had finished the wine in the glass. He tipped the glass over hoping that something would spill onto the counter. Nothing. Isaac was tempted to throw the glass at the bottle laden wall behind the counter, but he was not that kind of man. He placed the glass down gently and smiled at it imagining it was his Kirabo.

My sweet Kirabo…what can I do to make you less cold?

Isaac let out another sigh knowing that Kirabo was probably somewhere in her classroom studying. He had been supportive of her choice to take on another course. He drove her to class and discussions. He woke up with her in the middle of the night to read whenever they were in his rented place. He even prayed for her, but all that meant nothing at the moment. Kirabo was being cold.

Isaac pulled out his wallet, but he knew what he would find there. He had not been paid for the last three months and he was running on the furthest pits of his savings. Still, he opened the empty leather purse that had been a gift from his beloved Kirabo. There was nothing…not even a ten thousand for petrol for his little Spacio parked out front. Isaac closed his wallet knowing that it too had deserted him just like his Kirabo.

He let out a sigh and rested his head on the counter.

“I can buy you another glass.”

Isaac turned his eyes to the woman he had almost forgotten about. “Why?”

“I told you,” she replied, “you look lonely. I think you need a friend.”

“What do you want?” Isaac knew no one in Kampala did anything for free. There just had to be a catch.

The woman raised her hands in surrender. “I swear…it is just a drink. I walked into the bar and saw you seated over here. Honestly you looked – sad, just so sad. That is why I walked up to you.”

Birungi called over the bartender and ordered for a glass of dry red wine for Isaac. She on the other hand asked for a glass of Krest with lemon slices and ice. The bartender gave Isaac a glare and asked the woman if she was sure she wanted to buy Isaac any more drinks. Birungi assured the man it was alright. The man brought their drinks and went back to his more malleable patrons.

“I like that song,” Birungi said leaning forward on the counter to put the lemons in a glass. “I think this chick is pretty good for Ugandan standards.”

I do not care.

Isaac did not waste his time listening to her. He took a deep pull of the wine welcoming the bitter taste to his tongue. It made him forget all about his loneliness. Suddenly, he felt the woman’s soft touch on his shoulder. Isaac turned and looked at her. She simply smiled and squeezed his shoulder with gentle reassurance.

“Don’t take it so fast,” she cautioned.

“You will wake up with a massive hangover,” she said.

“Better that than…” Isaac trailed off. He did not want a stranger to know what he was feeling.

“The loneliness,” Birungi said quietly. Isaac just looked at her and shrugged. “I told you, I saw you when I walked in and it is written all over your face.”

“Your loneliness and sadness,” she replied.

“So what?” Isaac glared at her. He noticed that her hand was still on his shoulder. It felt warm but unfamiliar. He wanted Kirabo’s hand on his shoulder, not some strange woman who thought that he was a charity case. “It is my loneliness and sadness – not yours.”

“What is making you lonely Isaac?”

Isaac glanced at her hand. There was a part of him that wanted to vent, but he never vented to strangers. He only vented to Kirabo and Birungi was not Kirabo.

Birungi dropped her hand and smiled instead of getting offended by Isaac’s harsh tone. “What is her name?”

“The woman who has you feeling as if you are nothing in the world – what is her name?”

“How do you know that it is a woman?” Isaac demanded.

“Come on,” Birungi said as she sipped her drink. “There is only one thing that can make a handsome man like you feel the way you do and it is a woman.”

Isaac could see that his hands were shaking. He picked up his glass of wine and took another deep mouthful of it. He looked at Birungi who was eyeing him curiously. She seemed amused by the way Isaac was looking at her. To him she seemed like some alien.

“So what is wrong with her?” Birungi continued to probe.

“Why don’t you leave me alone with my problems?” Isaac snapped.

“Because Isaac, I think you need a friend right now.”

“I do not want one,” Isaac shot back.

“Too bad because you owe me a drink…so the least that you can do is tell me what is making you so lonely.”

She had a point. I knew I should not have accepted her offer. He had to either tell her or get out of the bar. There was a greater chance of hell freezing over compared to him meeting this strange woman ever again in his life, if he decided to get out of the bar and head home. He could not share his loneliness. It was his alone and he knew the cure. The cure was in her discussion and he would go get his cure.

I rather risk her being mad than staying here and being probed by this she-devil.

He was going to run. He did not want to answer Birungi. Isaac was intent on avoiding her questions. Just as he was about to bolt out of the door, he realised that he did not have enough fuel to make an escape. He cursed his luck at that moment. He knew that he had to figure out a way to get out of the mess.

But what is so bad about telling her? A small voice of doubt crept into his head.

He felt the conflict in his heart. Maybe talking to a complete stranger could help him see reason. Isaac was a mess and he needed help. The loneliness was driving him mad. Isaac looked at his drink and made up his mind. He looked up and found that Birungi was looking at him waiting for an answer.