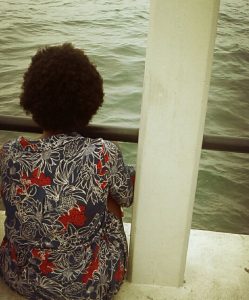 Libuseng rushed to the bathroom, into the small toilet cubicle and locked herself in. Beams of the Tuesday afternoon sunlight gushed in through the small, circular window located high on the wall opposite to the toilet door. The walls of the tiny cubicle which, in their prime time, must have had fresh, white glazing paint on them, seemed to look newer when the afternoon light fell upon them. She pulled the toilet lid down and sat down facing the roughened-up wooden toilet door. The water in the cistern behind her, as usual, made its rather strange sound that was something between hissing and cackling. Libuseng knew this sound too well. In fact, she knew that every ten minutes, the hissing and cackling sounds would peter out until there was only this whooshing sound. She also knew that almost every Tuesday and Friday afternoon, Mama Lydia washed the toilets in her corridor using some cleaning product that Libuseng had never been able to identify. Whatever it was, it had this strong smell of pine trees and strangely, what Libuseng thought was a tinge of peaches. Libuseng loved that scent. Two contradictory scents that blended almost perfectly together, Libuseng had always thought. She sat silently on the closed toilet seat for almost five minutes, staring rather blankly at the door and listening to the breezy sound of the water in the cistern behind her. She knew she was in a state that made crying a reasonable and perhaps necessary thing to do. But she did not want to cry, at least not then. When she cried, she felt she could not think cohesively. Today she wanted, in fact, she needed to think with undisturbed clarity. She decided to let out a very deep sigh instead, which she reckoned was temporarily sufficient in echoing the overwhelming state of her mind. She would not cry.

It was not just anger that was fuming inside her, she began to realize as she sat and thought on that toilet seat, it was sadness. A sadness that made comprehending any other feeling almost impossible. The combination of ferocious anger and the relatively calm sadness lurking within it was exhausting. Libuseng blinked back tears. She had adopted the habit of consciously assessing her own feelings, in depth. She was not sure whether the sadness underlay the anger or whether the opposite held true. What she did know was that these two together exhausted her. She let out another deep sigh, successfully curbing the emergence of tears from her eyes. She would not let herself cry and that was proving to be a strenuous task.

They had never fought like that. It was one of those fights that continued in the head long after it was over. Either she deliberately replayed it over and over in her head, each time with more detail than the last or it ricocheted endlessly on its own will. We are not coming back from this, the dreadful thought swept swiftly across her mind before she even had time to brush it off. It was scary. One never thinks that somewhere within the intricate furrows of a strong, beautiful friendship could lie this unidentified thing that has the potential to cause a drastic collapse. It was too much to think of. In fact, her life was too much to think of. It was all too much to try process.

She stared at the door and the entire time, her fingers toying around with her jacket’s zipper. It was quite funny, she realized at that moment while trying to find something to divert her mind from her emotions that showed no signs of abating, how she went to the toilet in order to be alone to think. The toilet could easily be disregarded as unhygienic and perhaps people would be right in thinking so. Libuseng felt the little toilet cubicle was clean enough. Mama Lydia, one of the hostel’s cleaners, whom Libuseng was very fond of, did quite a good job at keeping the toilets in Libuseng’s corridor clean and whatever cleaning product she used, Libuseng loved how it smelled. The shininess of the ceramic floor was also well maintained by Mama Lydia. Mama Lydia had worked in the girls’ residence for over ten years, Libuseng had heard. She mothered all the college girls that lived in Mehalitoeng Girls’ Residence. Libuseng loved Mama Lydia. At the beginning of the year that had just past, when Libuseng was a first year student, Mama Lydia had found Libuseng sobbing in the same bathroom. She was home-sick. Libuseng remembered that this newly-found mother had silently pulled her to her full bosom so that Libuseng found herself buried in her comfort, crying . She did not like crying in front of people. But she had that day on Mama Lydia’s bosom.  The relationship that followed between the two entailed a series of sitting for hours at the bottom of the staircase near Libuseng’s corridor, chatting about everything and nothing. The over three decades gap that existed between the old woman and the twenty-one year old becoming woman was in actual fact, a bridge- connecting them in a way that Libuseng had never thought was possible. Mama Lydia had become her friend.

Libuseng let her mind wander, thinking of other places that she could go to and some that she went to, to be alone instead of some cubed up room that so happened to be a toilet. The college campus was big enough for such places. It had a lot of them. There was, for example, a small park behind the classroom block, covered with well-mowed green grass and had a number of benches of rough, unfinished wood situated under Oak trees. Most afternoons during school days and weekends, the park was crowded with students but in the evenings, when most of them were home or in their hostels, the park was actually quite serene. Libuseng had sat on one of those benches one evening when she was from the library. The solar lamps which were attached high up on the trees shone so brightly in the park giving an illusion of the park experiencing daylight of its own. At a well-chosen time, the park was a good place to spend time alone. Libuseng also thought of this obscure spot near the college’s dam that she and Mellissa had established as their own. This, after the toilet cubicle, was her favourite place. Amidst the long grass that surrounded the water was this large rock that was conveniently architectured to be comfortably sat on for it had an almost perfectly flattened top. Mellissa, Libuseng’s close friend had introduced her to the spot. ‘It’s the closest thing to paradise, I tell you friend’ she had said to Libuseng with unmistakable excitement when she first discovered the place. One could swear she had struck some treasure. After Libuseng’s first visit to The Rock, as they soon began to call it, she was convinced that perhaps it was a treasure of some sort. The long grass gave her a sense of privacy, shielding her from the entire university campus with its busyness that could sometimes get unbearably overwhelming. The stillness of dam water, she sometimes thought when she sat on The Rock, had the same calmness-inducing effect that the sound of flowing water had on other people. It was strange how two antagonistic phenomena could produce the same effect- the stagnant silence of a dam and the relentless sound of the river flow. Usually when she went to The Rock in some afternoons, she would do nothing but to simply sit and stare at the still water. The scenery itself was not all that idyllic. Brownish-green lumps of algae floated on the surface of the water and occasionally, there would be a lingering smell of the leshushutha plant, which was not particularly pleasant so that it was even questionable why the two girls loved The Rock at all. Libuseng tended to appreciate the absurdities, the anomalies of her everyday life. She thought The Rock was a real place, in the real world for a real girl- flawed.