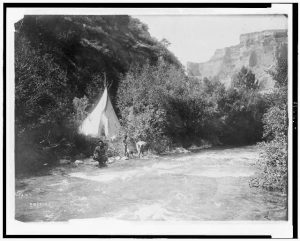 Every night it’s the same. The sequence always follows a specific pattern, a worn-out road to the same conclusion. The dream always starts with me. I’m on a hill in the middle of some grassy plain. My men are down in the valley, sweeping what remains of the enemy. None stand before me anymore. The wind blows away the memories of their empires, and compels even the grass to bow.

Yet, proud as I am of my conquest, something yet gnaws at me. I find no real fulfillment in any of it. The joy I once got from running my spear through a man, the thrill of conquest and death, it has vanished. It seems I have lost all reason for my actions. Yet I cannot stop. What happens to me if I do stop? What am I without the destruction and war?

This is usually when I hear it. It starts as faint laughter, carrying on the late day wind. I turn, and in the distance I make out a small hut and a few figures in front of that hut. They are only a few hundred yards away from the death happening on the other side of the mountain, but they may as well be in another world entirely. I descend from my hill and make my way towards the hut and its inhabitants.

As I walk toward the source of laughter, something shifts within me. The knot of desire and need for power seems to unravel. The weight of power lifts from me, step by step. Eventually, I feel lighter than I have in more years than I care to count. Dare I say it, I even feel happy.

The laughter is coming from a woman and her son. They’re playing in the grass in front of their little mud hut. They’re chasing each other around, playing a game of tag. Every time the woman catches the boy, she lifts him in the air and peppers him with kisses. He’s a big boy, but she throws him around with ease, her own dainty stature no hindrance to her show of affection. Whenever the boy catches her, he hugs her around the waist before he takes off and bolts around barefoot, screaming in glee.

I walk closer to the hut and stand fifty yards away as I watch this scene. It repeats itself many times, and yet, no matter the monotony, the boy and his mother never seem to tire of it. They never look in my direction once in all their playing, despite me being within shouting distance. I want to know why they are so happy, but I fear my intrusion would be ruinous to their magic. Yet I need to understand their joy in the midst of nothing but death and sorrow. I open my mouth to shout to them and ask, but the words stick in my throat. I’m silenced by the emergence of a figure from behind the hut. The person is in the shadow of the small structure, but I can make out the outline of a man, tall and broad, with a spear in his hand and what looks like a rump sack on his shoulder.

Silently, the man lays his sack on the ground, and the spear next to it. He begins to sneak toward the woman and her child, in a pouncing position not unlike a lion. The woman has the boy in her arms and he is struggling to escape her small hands. His laughter is louder than ever, and the smile on her face beams brighter than the sun. I shout at them to look behind them, but they hear nothing. I shout again, louder this time. Nothing comes of it.

The man is almost at them now. I run at the scene, forgetting the exhaustion of the battle just passed. I carry on shouting at them to look behind, but my warnings yield no result. I’m almost there but so is the man. That is always when I meet it.

The river. In truth, it’s more of stream. No more than ten yards wide, and far less than that in depth. The water comes up to just above my waist, and its flow barely slows me down. I start to cross the river, wading through the water with all the haste I can muster. But I never do. Each step I take seems to make the river wider and wider. The depth remains as it was, but the other side of the stream never gets nearer. The water still flows gently, but no matter how much I move, I am stuck in the same place. I drop down into the water and start to swim. It’s barely deep enough for my strokes, but I rush away at the waters. I swim and swim until my shoulders burn from the effort, but no bank ever comes in reach. I stand up and look down at the river. I haven’t moved.

A scream echoes near me, and I look up in time to see the man reach the woman and her child. He bundles them both up in his arms and the twirls around with them held solidly in his muscled grasp. Neither mother nor child can contain their happiness, and when he sets them down, the mother immediately wraps her arms around his neck, as the child hugs his father’s legs tightly.

Relief washes over me, as I stand in the water. The family begins to play there and then. The father is now the chaser, and each time he catches his family, the scene of happy reunion repeats itself. I have never seen people more content than this. I would be sated to just stand here in the water and watch them in their bliss forever.

Mid-play, the father casts a glance in my direction, and his gaze stays upon me. He sees me. The mother and son stop playing and follow his stare. The smiles fade slightly, and are replaced by looks of curiosity. We stare at each other for a time, before the child gingerly moves toward the river. At the bank, he stops and stretches out a hand in a gesture of invitation. His parents soon join him at the bank, unfolding similar welcome to me. I start to wade in the water again. I am certain that I can cross now that I have been invited into their world.

The river will not let me. Desperately I push and push against the gentle waters, but though I am moving, I go nowhere. I dive within and try to swim again. Nothing. I even try to leap from one point to another, but I always land in the exact same place. Frustrated I hit out at the water, sending pools of it up in the air. The water responds by growing colder, sending shivers of pain through my legs. I cry out to the family, tell them I cannot cross and I need their help. The father’s expression changes, and he looks down at his wife. A look of understanding passes between them, and when they turn their faces back to me, all I see written on them is pity. It’s the same sympathy I have given to many a dying man fighting helplessly to tether himself to the last roots of life.

The man lays an arm around his wife’s waist, and a hand on his son’s shoulders. Wordlessly, they turn around and walk to the hut. I yell after them, barking in anger and misery both, but none of them turn to look back at me. I watch after them as they disappear through the small doorway in the side of the hut. Everything is silent again. Nothing sounds save for the gentle charge of the water around me.

Why can’t I cross this river?