Naked. Ashamedly Unashamed. Me. Us. 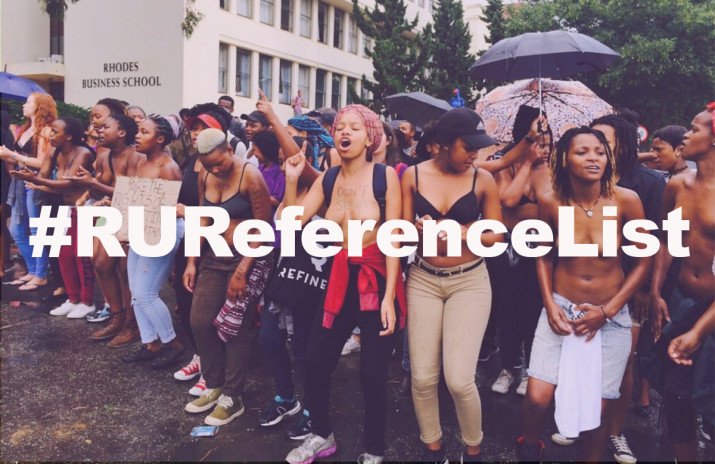 Naked. Ashamedly Unashamed. Me. Us.

In a world that has long appropriated, supported and defended a vulgar masculinity, we should not be surprised when women resort to using the only means possible to attempt to defend their own humanity. Let not the world be surprised when women strip naked to appeal to you to listen. Were there other ways to appeal to this world's humanity – masculinity – to heed the plight of countless and dauntingly dehumanized women? No. Because the available means aren't available. How do I report a case to the likeness of the very image that violated my life? How dare you ask and expect me to trust that same reminder of everything that just robbed me of me?

Are all men rapists? Don't be silly. Wait, perhaps – maybe?! Shall we pose this question to the woman who continues to brave life despite rape? Does that even count as brave?

Every so often I find myself googling the definitions of rape and rapist. Wikipedia says that rape is “…a type of sexual assault usually involving sexual intercourse or other forms of sexual penetration perpetrated against a person without that person’s consent”. The merriam-webster dictionary defines rape – the noun – as:

1:  an act or instance of robbing or despoiling or carrying away a person by force

2:  unlawful sexual activity and usually sexual intercourse carried out forcibly or under threat of injury against the will usually of a female or with a person who is beneath a certain age or incapable of valid consent…

Interestingly, the definition for rapist provided by Wikipedia is, “unlawful sexual intercourse or any other sexual penetration of the vagina, anus, or mouth of another person, with or without force, by a sex organ, other body part, or foreign object, without the consent of the victim.” This is a definition I recognize in today's world. It is a masculine definition, if I am to try and understand it, because it almost seems to suggest that rape is an act by a thing or part of a person BUT not by a person. Be it as it may, these definitions do not mean a thing. And as I started this article, it is a world that has long appropriated, supported and defended a vulgar masculinity – no wonder, such definitions can exist in our present day.

The definition of rape that many women may recognize simply is – “no”; and it could have been vocal/verbal, audible, or unconscious and silent – inaudible – or none of these. Do you ever wonder how consensual, consensual sex is? The definition of rapist that many women will recongise is – friend, brother, Dad, uncle, cousin, colleague, workmate, boss, director, boyfriend, husband, son, nephew, grandfather, worship leader, pastor, leader, brother-in-law, president, mayor… titles that seem to involuntarily carry, bear and house the “sex organ, other body part, or foreign object”. Surely, it has to be something they carry involuntarily since they had no part in deciding whether or not they wanted it, right? Haven't you had men say that their penises have a mind of their own? I've often found that statement interesting. We can almost forgive mindless statements for the world is full of mindless men and women, but mindless, and callously ignorant statements should never go un-noticed or unpunished. Because they promote the present but age-old rape culture.

In a world where the mainstream believes in a brainless “un-rape-ble” idea, women are often left with little to no choice. In a world where freedom is only minimally afforded to women in reality, but theoretically preached for all, one quickly realizes that “propertis-sing”, and dehumanizing of women has long been upheld by the same people we've been taught will protect us. There is no such thing as men should protect women. And quite frankly, I do not know from where the concept came. During war time, women and children are considered vulnerable, perhaps because they can be used as tools to tear and render nations powerless – and nonexistent. We are, after all, the life source in many ways. But to even consider the nonsensical idea that women can be “un-rape-able” is to wrongly, and yet interestingly, continue to appropriate, support and defend, again – an uncouth masculinity.

I've heard it said that this is a man's world. Damn straight it is! The evidence is everywhere – all around you and me – us. But if you cannot see it clearly, look in the mirror and tell the person you see that it is a man's world – because it is. If it weren't, we would not be talking about rape. Women would not have to take to the streets to implore leaders – men – to do something! When you sit in a room with your girlfriends and literally each one of you can attest to being touched without consent, I tell you, this really has always been a man's world.

I salute the #RUReferenceList women of South Africa. They are brave. Not because they protested naked – even though that too is very brave – but because they dared to speak. Theirs is a scream that resonates with the heartbeat of humanity. We – women – are that heartbeat but this heart is in an endless, tangled coil of pain. Listen, if you would. Listen. To the countless afraid women and girls – afraid to speak out and use their bodies as a voice – take heart. You were never meant to speak out, because it should never have happened in the first place.

…and yet it did. Take heart.