Mind Your Freedom of sMYTHch 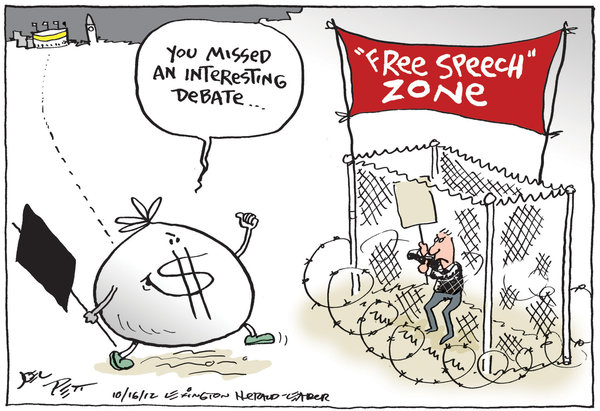 Mind Your Freedom of sMYTHch

Is there such a thing as freedom of speech in this day and age? It is a myth!

It appears to me that freedom of speech belongs to those who own the economy; those who are already in a position to defend themselves should they say something suable. The only other category of people who can exercise freedom of speech is those who cannot afford to be sued, rendering them voiceless anyway. The voiceless live in areas where they cannot be heard – there is not a chance that anything they said would mean anything. What's more is that they may not even know what is going on in their country and that which requires their collective voice of revolt.

Here is the thing. A certain institution issued a statement (which you can find on social media platforms) in which I as a reader was left wondering if what they were saying was acceptable. Knowing this great institution, and the fact that they have got enough wealth to last for generations, I realise that their statement is “acceptable and legit” because they are powerful. Their power comes in the form of money and influence. They have access to courts, and the best of lawyers – they could afford any lawyer on this planet, whatever their per hour billing rate. But the students that they intend on intimidating with this statement cannot afford the kind of lawyers needed to take on such an institution.

A certain institution cautioned that it could take disciplinary action, expel, suspend or criminally charge those who like, tag, retweet or share inciteful posts on platforms such as Facebook and Twitter. A spokesperson said that the statement was intended as a reminder that things posted to social media can come back to haunt those who published them.

Let me break it down for you: you are not to have a brain. You are not to exercise the education you have received from the institution (and this may be seen as propaganda – do I have a right to interpretation?); you are not to have an opinion. You cannot agree with the problematic structures being exposed. You are not allowed to be angry because there is a white way of dealing with all problems since black people need an education on how to “diplomatically” revolt (hello Trevor Noah). You shall not express dissatisfaction with the institution after all, it is their money at stake…not yours or your grandmother's meager pension since the new money blacks are comfortable in their suits. Do you not see? People are being gagged by the money.

From where I am sitting, diplomacy benefits those who are already benefiting from the system. I am one of them, and we are many…perhaps you're one of those reading this; but we are not the majority. We know that the anger we've witnessed over the last couple of weeks and months is valid. How it is expressed may not suit many of us, but it sure represents masses of people. If I am frustrated by an inability to afford printing credit, and my neighbor in class is worried about which desk he will sleep under for the night, and two bodies away, another has a grumbling stomach because the last cheap sandwich exited the stomach in a tiny lump – why couldn't it stay a little longer to get them through a second day, huh? A few seats away, another can hardly make sense of pronouns, adverbs and adjectives… These seemingly small frustrations and inconveniences, when combined, displace the need for diplomacy, because they cause the heart to lose hope. Diplomacy reminds us, in many of these instances, that the privileged few among us are conveniently and even intentionally blind (call it brainwashing if you prefer) to the realities of the majority.

I do not offer solutions to many of the real problems on the ground. I also know that there will always be a gap between the rich and poor. But when the one side attempts, and takes steps to cross and bridge that gap the best way they know how, a legal gag will only temporarily stop them. Yes, it may, in the meantime, halt the progress of the movement…or it may further fuel the fire that is already ablaze. I guess, we will just have to wait and see.

Now, before I am sued by any institution, and because I realise I am also privileged, this reflection is merely a reflection – food for thought. I do not advocate for violence or defamation, or anything that leads to either without valid cause. I advocate for freedom of speech, if indeed it is not a myth in our world today. I advocate for actual or real access to education. I advocate for humanity – because we are better together. I advocate for change and movements that level the playing field for all citizens of this land many call home.