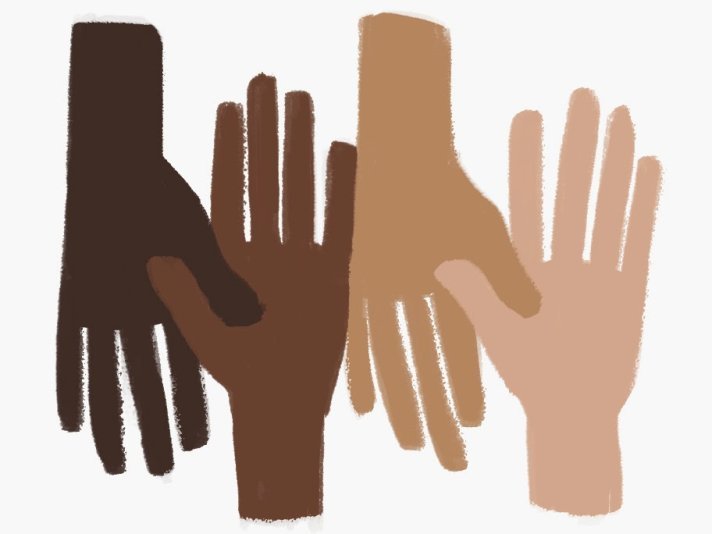 I do not know how to be colour blind – honestly speaking; even while growing up, some kids called me brown kindazi (doughnut) because I was a shade or two lighter than the ordinary Ugandan. However, I will say this:

It is true that we should see each other as humans – brother and sister – where possible, because it is not always possible. If black South Africans can have a problem with other black people from other countries, that tells me that it is not always possible to see each other as brother and sister. In fact, biologically speaking, they are right; we aren't related. So we could be the enemy. So, how much more white and black distinctions?

The Language Policy is more than just a language issue – it is also an identity issue. A student shared something with me the other day. She says that outside of the major cities of South Africa, black students navigate studies in the English language, and not always successfully. The Afrikaans students are privileged to navigate their studies in Afrikaans – so, right from home, to primary and high schools, and then enter a University environment that conveniently has provision for them. The bookshop on campus and those around Hatfield in Pretoria for example, have an Afrikaans section for possibly ALL textbooks of the same subjects offered in English. However, you do not have the same provision for Sipedi, Setswana or IsiZulu etc. Now, one may argue that those languages have not been developed to a place where one could teach Chemistry or Physics or even Genetics in the said languages. They may be right but not that kind of right. When your oppressors still hold the monies and land, they will direct every resource to develop what matters to them – the Afrikaans culture and Afrikaner identity.

For those of you who live outside of South Africa, you may not know that many Afrikaners struggle to communicate in English, perhaps even worse than the blacks. So when they come to University, the privilege that they have exercised for so long is continually enabled by the very systems they set up. The Afrikaans classes at University of Pretoria are always packed as a matter of fact. It has made me wonder – if they were to navigate their studies in English, how well would they fair? After all, the black students have to navigate theirs in English – some make it, some drop out for many reasons but one of them is discouragement. They have to study in a foreign language (having to deal with internal translations through one or two other languages), and yet watch their competitors, children of former oppressors continue to have it easy. In essence, the oppressor is still actively oppressing them – giving them access to education but a limited access. Like someone dangling a sweet at a child but never really giving it to the child. The playing field is not level. Allow me to share an example.

When I taught at the university, I took two classes for two English groups. The other two classes each had an Afrikaans lecturer for the Afrikaans group. We taught the same material but in two different languages. In one incident, we gave a huge assignment; the highest in my class did not even get a distinction. If I remember correctly, they got about 72%. When I asked one of my colleagues how their students (Afrikaans) faired in the assignment, they said, and I quote: “I have five who have 95%”. I was very surprised, and expressed this surprise, to which they responded with, “oh they wrote lots and lots; it was very many pages and a lot of information”. My scepticism and curiosity would not let me rest. I informed our superior at the time and asked for a remark. Guess what? All the five students with 95% did not get more than 50% after the same assignment was remarked.

Say what you like but this left me very sceptical of the many passes with distinction pronounced at the university's graduation ceremonies because very rarely is it black South African students. I am certain that I am not alone in this scepticism.

So back to the Language Policy issue at hand. If the Afrikaans students were to study in English too, might the playing field be levelled to some extent? Let's see how they fair in this way. The Language Policy may be indicative of racial issues in South Africa but it is deeper than that, which makes me hesitant to join in the #ColourBlind Campaign. The Campaign means well, and I understand that; my hope, however, is that it does not trivialise, fail to appreciate the validity of, or undermine The Language Policy protests. It is important that this issue is dealt with head-on. Too much is swept under the carpet – for me, the #ColourBlind Campaign has the potential to “sweep this under the carpet”.

As a Christian, I support the idea; it is a good cause. Christianity was also the major player in apartheid. When you have a wound, you need to attend to it, clean it and treat it, and where necessary put a bandage. But bandages also must come off to allow for the healing process to complete…the itching, the skin peeling, sometimes the wound gets re-infected …but the bandage must come off in order for complete healing to take place. Christians – before you came to Christ, you had to confess your sins to Christ…you didn't just become one without acknowledging the mess you were. In the same way, the education system needs to acknowledge the language disparity, and address the disadvantages it deals out to the majority of this country – the black community. So, #ColourBlind won't work for me, brothers and sisters: I see clearly enough.