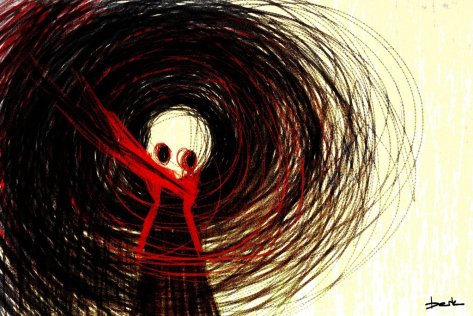 It came one day, the madness. Like a torrent of inevitability, washing away the man's sanity. He started acting crazy, as they say. But I don't think it was acting—if anything, it was the sanity that was always a play at pretence. At some point, I gather, he simply felt keeping his sense was no longer worth it, and he dove headfirst into the pool of crazy.

Contrary to what people would think, no one ever “snaps”. A person's mind is not a twig, living precariously on the ground, constantly in danger of being stepped on by the cruelty of life and then snapping in half. The crazy had been tugging away at him for as long as I had known him—a good twenty years—and each day that passed, he gave an inch in his hold. Finally, the attrition on his stability eclipsed his intent, and here we were.

Nothing seemed particularly off in the beginning. It was a normal day with Norest; normal for him and I meant waking up, walking down the dusty road to the corner shops, grabbing a few packs of cigarettes and, luck and cash willing, a few pints of beer. We would make our way back to his front porch, teasing the older girls in uniform as they made their way to school, making sure they were well aware that we took full notice of the various curves and bulges beneath the monotonously bland frocks. When we eventually got back to Norest's porch—or his mother's porch, to be exact—we cleaned away the red dust on our feet, and settled on two old wooden chairs to watch the world.

On that day he finally lost it, the routine was normal up until the point where we sat down. It was then that Norest suddenly recalled that he had forgotten to buy something at the shops. I grumbled, but made the round trip with him again to buy…sanitary pads. I teased him about it, but he remained stoic, telling me only that I should be more sensitive to other people's needs. When we finally sat down, the pads were opened, spread across the porch as if to dry, and weighted down with little rocks. I watched all of this with bemusement, assuming that this was the setup to some elaborate prank.

The morning passed with the rote conversations we always had. He talked of the corruption in the government, spoke of us starting our own party. We would be different, he said. We would control the power and direct it to helping the needy and the poor. Fuck the rich and the big businesses. Those pigs had been eating away at the fortune of this nation for long enough; now it was time for the people to have their day and find out what it was to get fat—or at least to not go to bed hungry. He took the rhetoric a step further today by standing on top of the rickety chair and miming reception to applause and waving his hands in wild motions as he addressed the 100,000 people who had shown up to his rally in support of the man of the people. The glee on his face was vivid, and as he stood on that imaginary podium, he seemed swept away from this world, enthralled in a place where he had reason to do nothing except smile.

The smile faded as soon as he sat down, however, and stated that his party would have no women in it. He stood his ground even when I pointed out that excluding women would severely cut back on the prospects of being a party for the people.

“You can't punish an entire population because one of them cuckolded you,” I told him. “Not all women are like that.”

“They are all like that. That whore Rashida—tell me, how many men did she sleep with? A hundred? Five hundred? Is it even a number that they've thought of yet?”

“You knew what type of girl she was when you brought her here, Norest. We all told you, but you wouldn't listen.”

“She fooled me with her serpentine charms, that daughter of Lucifer. But you know something, man, that is how they all are like. Even my own mother, I'm sure. Who is to say that that man who died calling himself my father was even the one who sired me? They've been doing this since the beginning of time, and using religion as their shield. Just look at Mary. These women are a man's curse. Why could God not have just made men able to bear children is something I will never understand.”

I chuckled and pointed out that he was basically advocating that all men be homosexual. He dismissed me as being flippant about a tragedy that had caught countless men off-guard, and mumbled that he was going inside to take his seventh piss since we'd sat down. As he had done the other six times, he took a handful of the sanitary pads with him when he went inside. Rather than ask him what he was doing, I thought about the chapter in Norest's life that was his relationship with Rashida.

She had been the local “it” girl when we were all in high school. No one ever bothered to describe her – because everything was so strikingly perfect that singling anything out would have been a waste. When we were sixteen, Rashida decided that school really wasn't for her, and took to utilising her looks to get by. She never turned tricks at the corner like all the rest; instead her…clients would pull up to her dead parents' house in all manner of shiny car, disappear into the folds, and emerge with a look of absolute satiation an hour later. She got by this way for close to fifteen years, until one day, suddenly, she decided that she didn't want to do it anymore. According to her, God had shown her the error of her sinful ways, and she wanted to purge herself of all the iniquity she had allowed into her body. Her contrition came in the form of daily church attendance and sweeping dresses that did their level best to hide the rare beauty.

No one bought this for a second, of course; and when rumours started circulating that she had simply re-directed her lust towards finding a husband, it made sense to everyone…except for Norest. For reasons that had never been quite clear, Norest was convinced that Rashida had found her way to religion so that he could be the one to bring her back into the embrace of propriety. He pursued her relentlessly, and she, coyly, encouraged him whilst never truly giving in until it felt proper to do so. A few weeks after he had begun his quest, he showed up to my house beaming and, in spare-nothing graphic detail, described to me how she had made him into a man.

They were married a few months later, the wedding day songs undercut by the current of whispers about my friend's stupidity. For a time, everything had seemed to be ideal. Norest worked as a finance officer in town, and spared no expense in seeing to his betrothed's comfort. He lost his job when it came out that some of the money he had not been sparing wasn't exactly his to be indiscrete with. That was when the rift started. They began to bicker and argue, and Rashida would often go away to “find her peace” for days on end, always returning to a Norest who had cooled down enough to take her in with no questions asked. When they discovered she was pregnant, I could not help but wonder how far down this rabbit hole my friend was willing to go. As Rashid's bump grew, the rumour mill almost spun off its wheel. The consensus was that the child was almost certainly not Norest's—that much was accepted. As to who the father was…well, nine months would tell. The entire neighbourhood held baited breath as the birth approached, and when the little boy came out with wavy blonde locks  and azure eyes, every local man except, again, for Norest, breathed heavy with relief. Perhaps no one breathed with greater respite than I did.

“Norest!” I called, “That dark skinned girl from down the street is passing by. Are you finally gonna find the guts to talk to her or just stare at her ass again?”

I chuckled at my own taunt and took another sip of the now tepid beer. Norest burst from the door like a comet on speed. Naked as Rashida had been the day he kicked her out, he belted down the porch, carrying a sloshing bucket that stank worse than a tavern toilet. I watched incredulously as he hurdled over the fence in one fell swoop and, catching the passing stream of returning school kids off-guard with his nakedness, started pelting the girls with urine-soaked sanitary pads. He got a few hits before everyone wised up enough to start running away. Norest gave chase, various bits flopping about, shouting obscenities at the girls and hurling the pads with surprisingly good aim. It was after he made a second pass down the road that a few of the men tried to restrain them. He dumped the remaining contents of his bucket on the head of one, and received a stiff smack for his troubles. I leaned back and watched as they struggled to restrain my friend whilst also trying to avoid as much of his naked body as possible. After no little labouring, they finally got him to ground and someone mercifully threw a blanket over his naked form. I looked at this scene a while longer, and then got up to put the remaining beers in the fridge.

Tags: By Fungai Chigumbura, Sink In Sanity
No Comments
Share this entry: