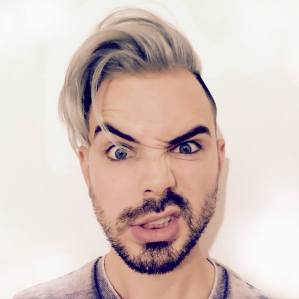 This week I read an interesting piece by Brandon Ambrosino called “The Tyranny of Buffness”. It explores the seriously high pressure within the 'gay community' to acquire a godlike body, and the shame felt when one does not match up to the expected standard. It's a very real account of anxiety and insecurity – something I can personally relate to. I'm pretty sure I have some form of undiagnosed body dysmorphic disorder – I refuse to wear t-shirts and shorts, and only go to the beach in jeans (though the advice on that website isn't great – sure, I'll just “become comfortable” with myself…so easy!).

The buff body, like Ambrosino mentions, is often all about a desirable and visible masculinity. For all the reasons that the article explores – resisting negative stereotypes about being gay, reclaiming and asserting power, consumer-culture attractiveness – buffness seems to have become the order of the day for mainstream (white Western) gayness. Like the article says:

[B]eauty acts hierarchically in the gay community. Those who have the resources to “Adonize” their bodies are rewarded with power and influence. Everyone else is excluded–and then blamed for not working harder.

So much so that national and international “Mr Gay” pageants repeatedly choose 'representatives for the whole LGBT community' cut from this buff cloth (really? In a contest where only gay men can enter you're going to find a representative for lesbian, trans, and queer people too?).

Although Ambrosino's article touches on it, I'm struck by the broader social implications that this trend has on being and belonging in the 'gay community'. Indeed, it's something I've really noticed, coming back to the UK after being away for 3 years: the clear disdain many gay men have for women and those men not masculine/butch enough.

Obviously this isn't a new realisation: academics have been exploring gay misogyny for decades, and a search of “gay male misogyny” on The Google gives you a good few hundred-thousand hits (including this interesting article).

But what really strikes me is how the rise in 'buff culture' seems to go hand in hand with the rise in anti-femininity and anti-effeminacy. I mean it's really, really noticeable. Like Ambrosino mentions in his post, if you go onto any gay social networking app you'll find lines like “No camp!” or “No fem guys!” or “Only straight acting!”.

'Straight-acting' is, arguably, one of the most offensive terms of contemporary slang. To be 'straight-acting' is to be 'masculine' and the term therefore insists on essentialist ideas of gender in which masculinity is perceived as the inherent property of straight men while gay men can only 'act' or 'pretend' to be masculine.

It implies that acceptance can only be found through 'acting' a certain way, and that straight men (the real masculine men!) are beyond reproach for what are their 'natural' (non-acted) masculine drives.

Rant aside, buff culture often seems to go hand-in-hand with effeminophobia – the fear of effeminacy. Many gay men I've met and interacted with do not feel uncomfortable around other men who are attracted to men, and they do not dismiss guys who identify as gay. So, often their prejudice isn't defined by the idea of homophobia. Rather, it's defined by their intolerance towards anything that's not masculine enough. Anything that's 'too feminine', and anyone who is effeminate.

Historically effeminacy has been merged with gayness (for an interesting exploration of this check out David M. Halperin's “How to do the history of male homosexuality“). In a culture where men are still perceived to be superior to women, gay men claim power through the privilege afforded to them by society for the prize of their gender. In relation to bodies, Richard Dyer notes that the importance of the body for a gay man lies in its status as a “last-ditch defence against merging with the feminine”. Effeminacy, then, or not being 'masculine enough', blurs what society tells us is the natural and obvious divide between men and women. Gay men have a hard enough time being accepted – why do some guys have to be so fem and act like women?! – something I hear far too often.

So it really shouldn't come as any surprise that in a context of increasing gender fluidity, in a context where historical male privilege is (in some places) being dismantled bit-by-bit, in a context of slow steps towards further equality, some men attempt to hang on to their power, embodying misogyny and effeminophobia as they pump iron and expect others to do the same.

Sure, I find muscled bodies attractive. I'll happily acknowledge that. What I don't find attractive is the expectation that all men should look as if they spend 2 hours in the gym each day, and that gay men should be butch, disgusted by female bodies, and actively avoid anything that makes them obviously 'fem'.

What really strikes me is how often this is explicitly expressed in person. On several occasions I've met gay men who refuse to go anywhere that's recognised as a gay space, or who refuse to go to drag shows because they're “too gay”. Of course this can be for many reasons – a genuine disinterest in performance, bad experiences of places, disinterest in going to pubs… But each time I've asked it's been a manifestation of the same reason: gay men have a bad enough reputation as it is, so we shouldn't be doing anything which makes us seem anything less than real men. And real men don't behave like women.

I'm not a psychologist, and I'm not a psychoanalyst, but I'm sure some argument could be (has been?) made that this sort of attitude often stems from a personal sense of 'privilege in crisis' and a sense of social disempowerment. Men are led to believe that masculinity is absolute and attainable. Gay men struggle to be accepted as 'real men' by society. Instead of working to recognise the socially constructed 'nature' of gender, many try and compensate by clinging tovisual markers of masculinity in an effort to prove themselves and show that their masculinity is not in crisis.

But to paraphrase Connell, masculinity can't be in crisis, because crisis implies stability out-of-sync. Masculinity isn't – has never been – stable. It's unattainable because it's an 'ideal'. It's a social construct.

Telling people to acknowledge this is easier said than done, of course. And suggesting it's as simple as recognising it and moving on is as ridiculous as telling those with body dysmorphic disorder to just “recognise their own value and love themselves” (vomit).

Obviously I'm not implying that all men who gym are misogynistic or effeminophobic. That would be silly. And obviously I'm not suggesting that the only misogynistic or effeminophobic men are those who frequent the gym.  But I do have a problem with the culture of buffness that Ambrosino identifies. We should all have a problem with it.

We should have a problem with it because it perpetuates a culture of discrimination and intolerance, using the body as a tool to isolate and project judgement. It perpetuates a wilful ignorance of privilege. It cultivates a ridiculous hierarchy of social and subcultural acceptability and desirability.

So what does that mean? Stop gymming? Of course not. It's been my resolution for the last *ahem* years to become more active at gym. I think it begins with (gay) men stopping and asking themselves why they buy into buff culture, asking why they expect others to be be a part of this buff culture, and questioning their own reactions to 'fem guys' and women.

Some men fire back that “oh, fem guys simply aren't my type – that's why I don't want to interact with them”. Okay…sort of…not really – to a point. It's rather shallow and absolute, but hey…each to his own. (I'm sure many feminists and queer theorists would gladly offer numerous arguments about the problems of separating attraction from politics…I'm not letting my brain go on that tangent right now).

But I'm not talking about sleeping with men. I think there's a difference between acknowledging your attractions and recognising your own deep prejudicial and discriminatory behaviour and attitudes (or is there? Hmm, maybe not?). Saying “fem or camp guys just irritate me” (again, heard that one so often) is not okay. That's prejudice right there, and it's as unjustified as saying “all gay men are disgusting and carry disease”.

It's not okay to say “straight acting guys only” on your dating profile. Think before you speak/write, and check your prejudice.