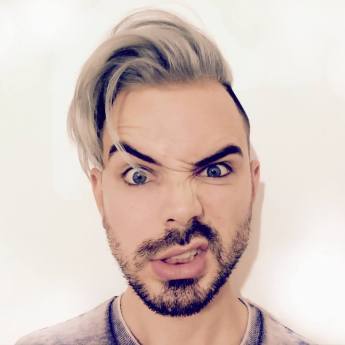 Too gay to function!

Of course this was a ridiculous approach to life, and left me excluded from many of the discussions and experiences which define teenage years. Everyone else seemed to be aware of my sexuality before I was, as so often seems to be the case. Or rather, everyone else seemed to be willing to acknowledge my sexuality before I was ready to. I was hardly the defining example of assimilation and discretion, mind you: I mean, what 16 year old wears a bright purple jacket and fedora with purple ostrich feather complete with walking stick to their final school dance? It’s practically a scene from Mean Girls. Come on, Damien!

The beauty of retrospect is that I am now obviously able to acknowledge that my clinical approach to life and my pedantic adherence to rules was a warped attempt to somehow ‘fit in’. Although, curiously, I made a point of being an individual by never doing what was expected of me as a teenager – my rebellion took the form of resisting peer-pressure and getting a name as a goody-goody, and at the time I never wanted to fit in. But my love of rules was an effort to find some degree of acceptance, because I ‘knew’ deep down that should anyone ever discover my sexual orientation I would never be accepted. Well, that’s what I thought at that stage. I often wonder, now, how different my high school career would have been, and where I would be today, if only I had had a positive gay or queer role-model at school; or even if the schooling system had spoken about general queerness. My experiences around gayness, that dark and mystical pathology, were wholly negative.

The context: all-boys Christian school (previously owned by the Catholic Church) with an emphasis on rugby and traditional masculinity, and a headmaster who explicitly and regularly said things like “boys who care about their mothers are creampuffs”, and “real men aren’t sissies”, and “if you want to be a real man you should care about your school, your country, and God”. Aside: school assemblies became hilarious once you realised you only had to watch some of the teachers’ faces during these moments; their attempts to suppress laugher often brought on bouts of stifled leaky-eyed giggling.

Hardly a unique experience on the whole I know, but it did make my own process of
self-discovery pretty complex. [Another aside: I really think that being forced to wear a thoroughly Victorian uniform all year round, and not being allowed to have anything other than a military hair cut in an effort to “look like gentlemen” hindered, and continues to hinder, any form of self-expression and exploration…]

Within this context I have five defining memories about sexual orientation in relation to my sense of being and belonging.

Firstly, my best friend at the time (who came out after school) and I were sitting chatting one day when an older student approached us and initiated a very friendly conversation. As things go when young boys are talking, the topic turned to girls. The student asked us if we had ever kissed girls. I replied with a no, much to his horror, and my best friend said “of course I have”. Later, my friend asked why I said no. “Because I haven’t”, I replied (I didn’t see the point – I had no desire to kiss a girl). He frowned at me and said, “Well, neither have I, but sometimes you need to lie if you want to be accepted and you don’t want them to tease you”.

My second memory was after a (compulsory) religious education class. A good friend of mine was a fundamentalist Christian. We made an odd combination, but enjoyed each other’s company and helped each other study. The class discussion turned, I forget how, to homosexuality and the bible. After the class my friend asked me for my thoughts, and I remember quoting a passage (these were during my dark years of attempting to have a religion – beyond that now, thankfully) which mentioned that Jesus doesn’t judge, or something of the sort. He frowned and kept quiet. We moved on to our history class, and my friend asked our history teacher what she thought. She replied that she doesn’t judge people at all, and she felt that no person should. In all my time at school this was the only positive thought about homosexuality shared with me. My history teacher had an incredibly profound impact on me, and years later I would recognise the extent to which she helped me become myself. But naturally my friend wasn’t convinced by this and for the rest of the day he carried around his bible, reading various passages to me.

My third memory relates to my English teacher, to whom I was very close. She was young, and engaging, and the class loved her. She was passionate, and we shared many interests. During one of the school vacations a small group of students and staff took a trip to a national arts festival. The drive back was 12 hours, and – after having seen a production which dealt with bisexuality – she deconstructed the play with me. The outcome of that conversation was “Matthew, you can do anything you want to do, and be anything you want to be, but promise me now you will never be gay.” Being gay was disgusting, unnatural, anti-God, unholy, and a waste of all my potential.  ”Don’t worry, ma’am,” I said, “I won’t be – I agree with you”.

My fourth memory is of the one gay student I knew. He bravely came out at school. He was a year above me, and I couldn’t stand him. Not because he was gay – just because he was annoying. Personality clashes aside, I remember him being horribly teased. I remember the comments every boy would make as he walked past. I remember the teachers being quiet. I remember the ice being thrown at his head every day. I remember the headmaster not caring, dismissing it as “the boy’s choice to tell everyone about his preferences”. I remember shaking my head at him, and getting irritated, and realising many years later how incredibly difficult his journey must have been.

My final memory is perhaps my most formative. Upon consideration it’s not so much a single memory as it is a collection of memories about a particular individual. The school employed a middle-aged gay man; his stares at the boys were obvious, and his comments to the boys he assumed (correctly, for the most part) were gay were wholly inappropriate – not because of their homosexual nature, but because I am of the opinion that a person in authority should not make sexual remarks about students to other students. It’s an abuse of power: how is a 15 year old boy, with barely a shred of self-confidence in relation to his repressed sexual identity, meant to respond to comments from a teacher-figure along the lines of ‘doesn’t he look amazing in that Speedo? It fits him so well’?

He made inappropriate comments to my friends, who were all too afraid to report him. He made numerous inappropriate comments to me, but I ignored them and dared not question the structure of authority – after all, the structure was good and had made me a prefect, had made me a top academic, hadn’t it? A year after finishing school, through a series of events and my sense to use social networks discerningly, it transpired that on two separate occasions he posed as a 19 year old online to try and solicit personal information and pictures from 17/18 year old me. I caught him out, but never confronted him. As the only openly gay man I was exposed to as a teenager he did impart one shred of wisdom: in many ways he showed me the type of gay man, indeed the type of person, I never wanted to be.

School was a strange time for me. I left wanting to study genetics, but decided I was more passionate about law and so switched faculties at the last possible moment. As life happened I became more interested in gender and culture, and here I am today – wholly more confident with my identity and sexuality, but still unpacking the implications of my schooling years. Despite the undoubtedly negative impact it had on my sexual identity development, school had some extremely positive effects on my growth. I learnt how to be independent and sceptical.

School is one of those things for which I feel equal affection and rage. It’s bizarre to watch coming-of-age films today, or read contemporary novels, and try and place myself in those contexts. It’s such a different landscape, in so many ways. Of course many students have it far worse than I: I never seriously contemplated suicide, and was never so severely bullied, and always had a strong family support structure. I’m incredibly grateful for the educative experience of school, but I’m not sure whether I’d call my school years happy or fond – I really became myself after school.

It’s the 10 year anniversary of my class this year. Evidently my class mates have very different memories of school, and many are excited about being reunited. I, for one, am glad that school is behind me.